[Infographic] How to Study: Mycology

Do you want to improve your study habits? Start with Mycology and Picmonic! Our proven mnemonic Picmonics help students retain information better and recall if for exams, clinicals and in real life. Let’s kick your studying into high gear. 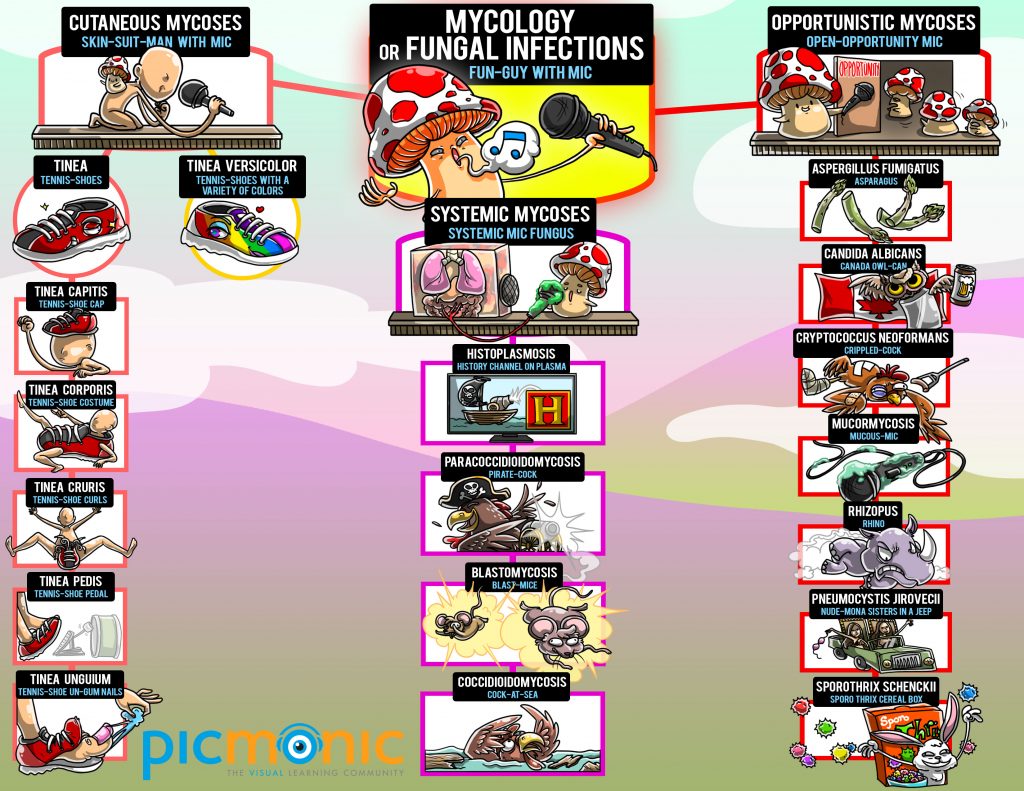 Aspergillus: a genus of monomorphic fungi named after the shape of an aspergillum, which is an instrument used to sprinkle holy water. Aspergillus fumigatus is one of the most common Aspergillus species to cause disease. Its spores are ubiquitous in the atmosphere and estimated that everybody inhales several hundred spores daily. The most common forms of disease are allergic bronchopulmonary aspergillosis, pulmonary aspergilloma, and invasive aspergillosis.

Candida albicans: is a fungus that causes opportunistic oral infections and genital infections in humans. When cultured in standard yeast medium at 20 degrees Celsius, C. albicans grows as yeast cells and can undergo a morphological shift to pseudohyphal growth with mild environmental changes in temperature and pH.

Histoplasma: a genus of dimorphic fungi known to be the causative agent of histoplasmosis. This organism has a yeast form that is 2-5 um and found within macrophages within the body. It is commonly found in bat and Starling bird feces and contracted by inhalation of the spores. Therefore, it is commonly associated with entrance into caves and is most prevalent in the Ohio and Mississippi river valleys. Symptoms of this infection vary but the disease primarily affects the lungs, causing pneumonia.

Paracoccidiomycosis: a disease caused by Paracoccidioides brasiliensis, which is a dimorphic fungus found in the soil as a mold in low temperatures and a yeast at higher temperatures. This disease is commonly found in Brazil. It is often referred to as a South American blastomycosis, since it is found in Latin America and causes similar disease presentation.

To learn more, get started with a free Picmonic account.

Visual Learning Tips & Resources For Every Student in 2022