A Comparison of Picmonic and Pixorize 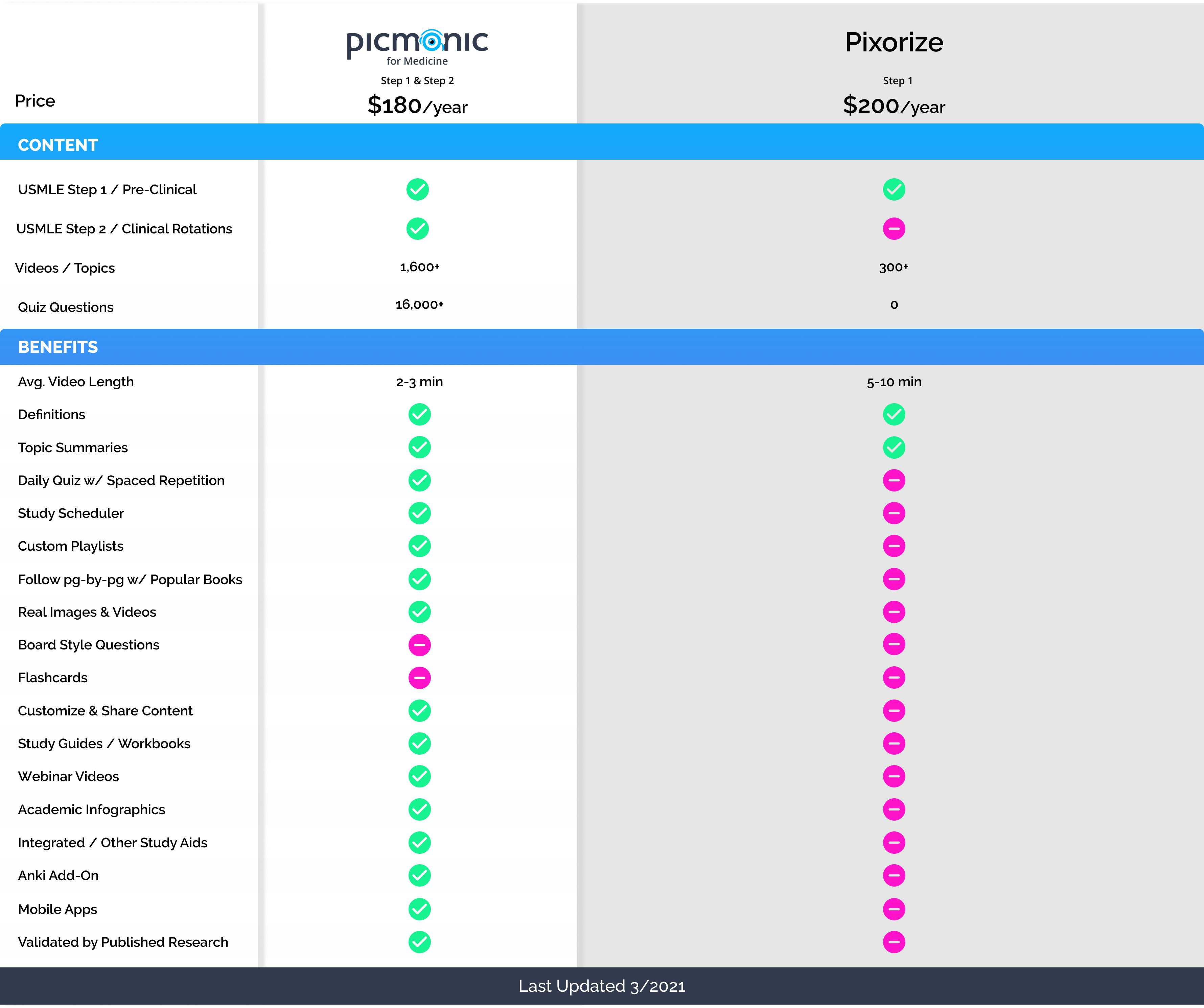 Which mnemonic flashcard resource is best for you? We compare both med study resources on content coverage, # of videos, # of quizzes, definitions, topic summaries, and features like daily quiz with spaced repetition, study schedulers, custom playlists, real images and videos, flashcards, customizing content, webinar videos, study guides, workbooks, academic infographics, and integration with other study aids. Plus we look at extras like Anki integrations and Add-Ons, alignment with popular textbooks, and mobile apps. 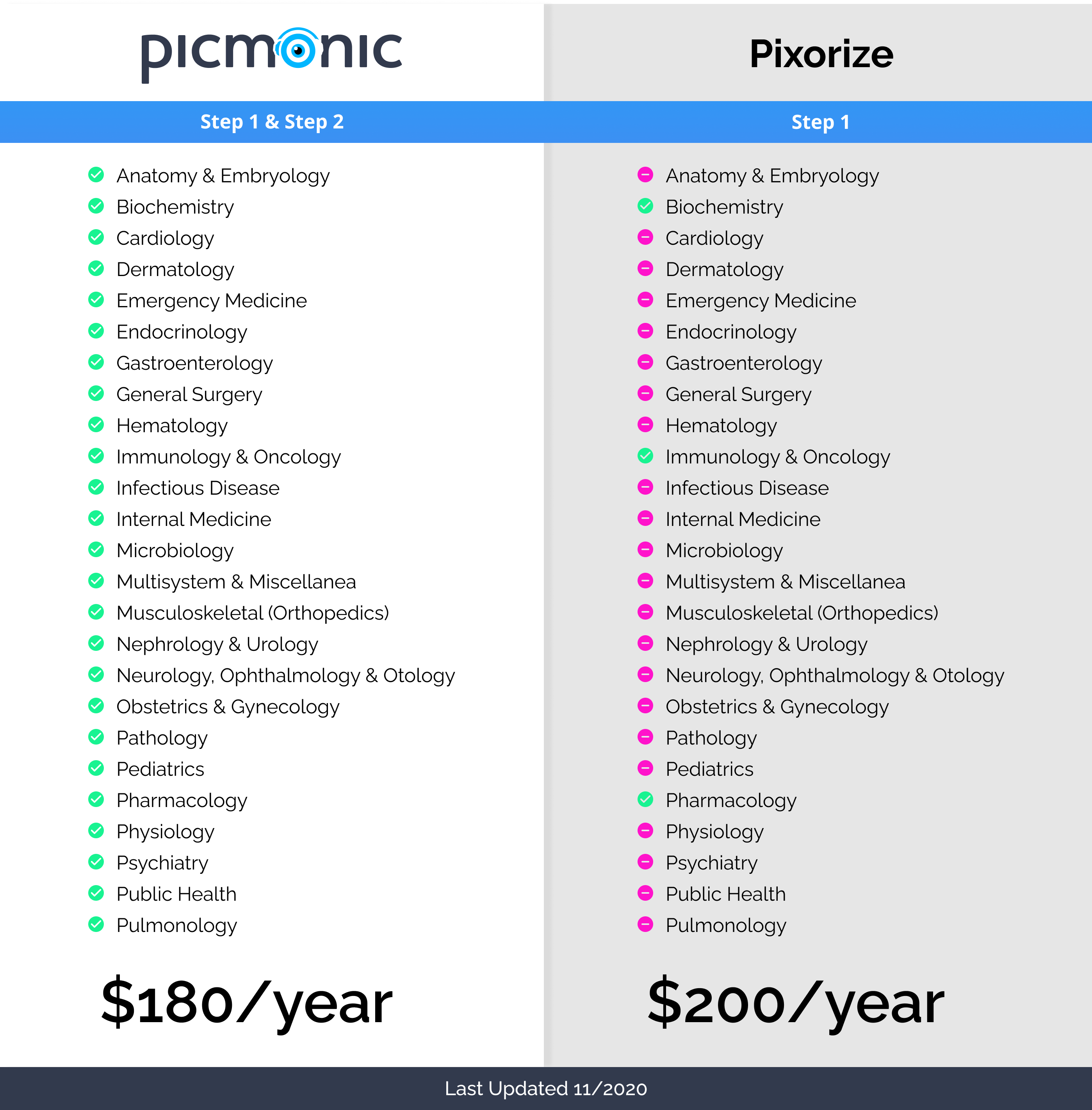 That's how much you'll save by choosing Picmonic for Medicine's visual mnemonic learning system over Pixorize Step 1 Complete 12 month plan. Plus you'll get more of the topic coverage you need to succeed at a fraction of the cost.

Since 2012, Picmonic has helped healthcare students master hard-to-learn topics and retain what they study longer, harnessing the power of picture mnemonics and spaced repetition in a single easy to use learning platform.

I just wanted to compliment you all on creating such an amazing resource for visual learners in medical school! Out of everything I use to study, Picmonic helps me lock it in long-term. I have KILLED my block exams so far because of all of you! It truly is a magnificent product. It really just helps me keep little details straight—something that is important to accomplish before Step preparation. I’m not sure how popular Picmonic is, but I want to assure you that there are people like me who love it and use it regularly.

Picmonic has been a huge part of my learning. I just took the first UWORLD simulation exam and I scored a 275 (99% percentile) and it’s definitely because of Picmonic.

I used sketchy before & don’t get me wrong, I liked sketchy for Micro & Pharm but I hated how it was pretty much almost impossible to review the videos before a test because you have to watch HOURS of videos to get through it I felt like the videos always had a bunch of extra $#!@ that was unneeded & distracted you from the actual facts.

I’m not trying to bash Sketchy, but Sketchy is for average students who are looking for a passing grade only, while Picmonic is for the students who want to excel because they were the ones who knew that extra small detail that changed their score from a 239 to a 245 or a 249 to 255….because one extra correct question on the actual USMLE can mean a few extra points.

I used Picmonic for my first medical school course which covered genetics, molecular biology, cell biology and a little bit of metabolism. The lysosomal storage disease videos made learning and memorizing the information much easier and more enjoyable. I am a visual and auditory learner and the Picmonic cartoons and funny narratives really cement the information in my brain.The videos for Biochemistry and Biostat are amazing and saved me time. I definitely recommend using Picmonic during year one of medical school and beyond!

Picmonic is a total game changer. I had trouble going back and revising old notes but with picmonic things get easy. They have cool picmonics and great spaced repetition program to study and retain more. I'm already seeing improvements, this is unbelievable.

Picmonic’s short videos are what set them apart from other medical school study-aid resources. When I need to cover a lot of ground, and gain those little extra bits of knowledge just before an exam, Picmonic is my go-to. On several occasions, it wasn’t the countless hours of review in front of a textbook, lecture slides, or whiteboard, that helped me recall an answer to a question, but a Picmonic that literally only took 2 minutes to review.

Picmonic was the perfect add on for my medical school studying! I like that it aligns with first aid and I always use it after I do first-pass of a topic.

Why Visual Learners Use Picmonic 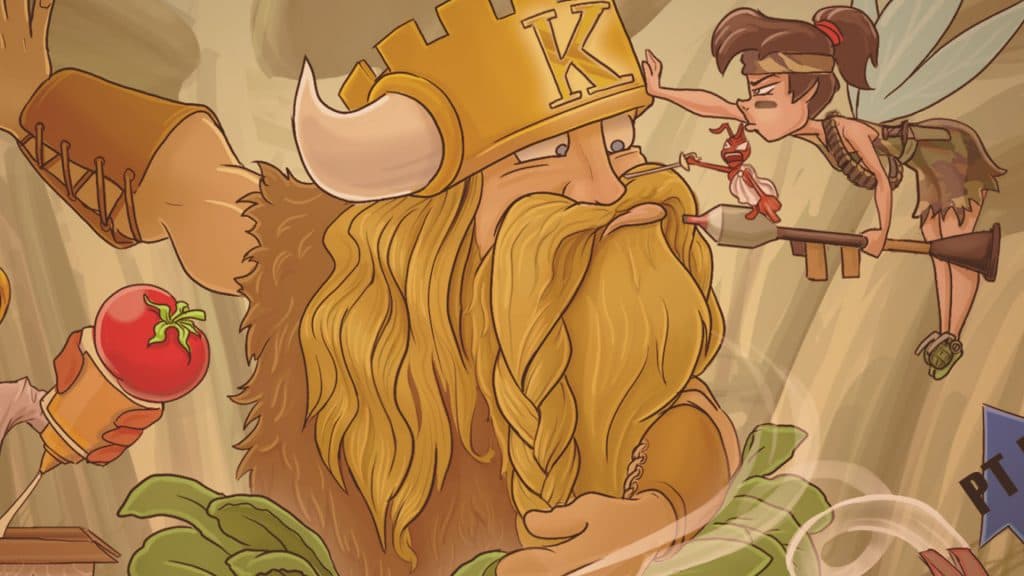 There’s no single secret to doing well, but a successful med school graduate happily shares some of the resources he used in his first two years to ace exams and prep for STEP.Read more >

"I Would Not Have Passed Med School without Picmonic"

Dr. Marc Katz, the author of mykittykatz.com, shares his tips for succeeding in medical school and matching with the residency program you want.View clip > 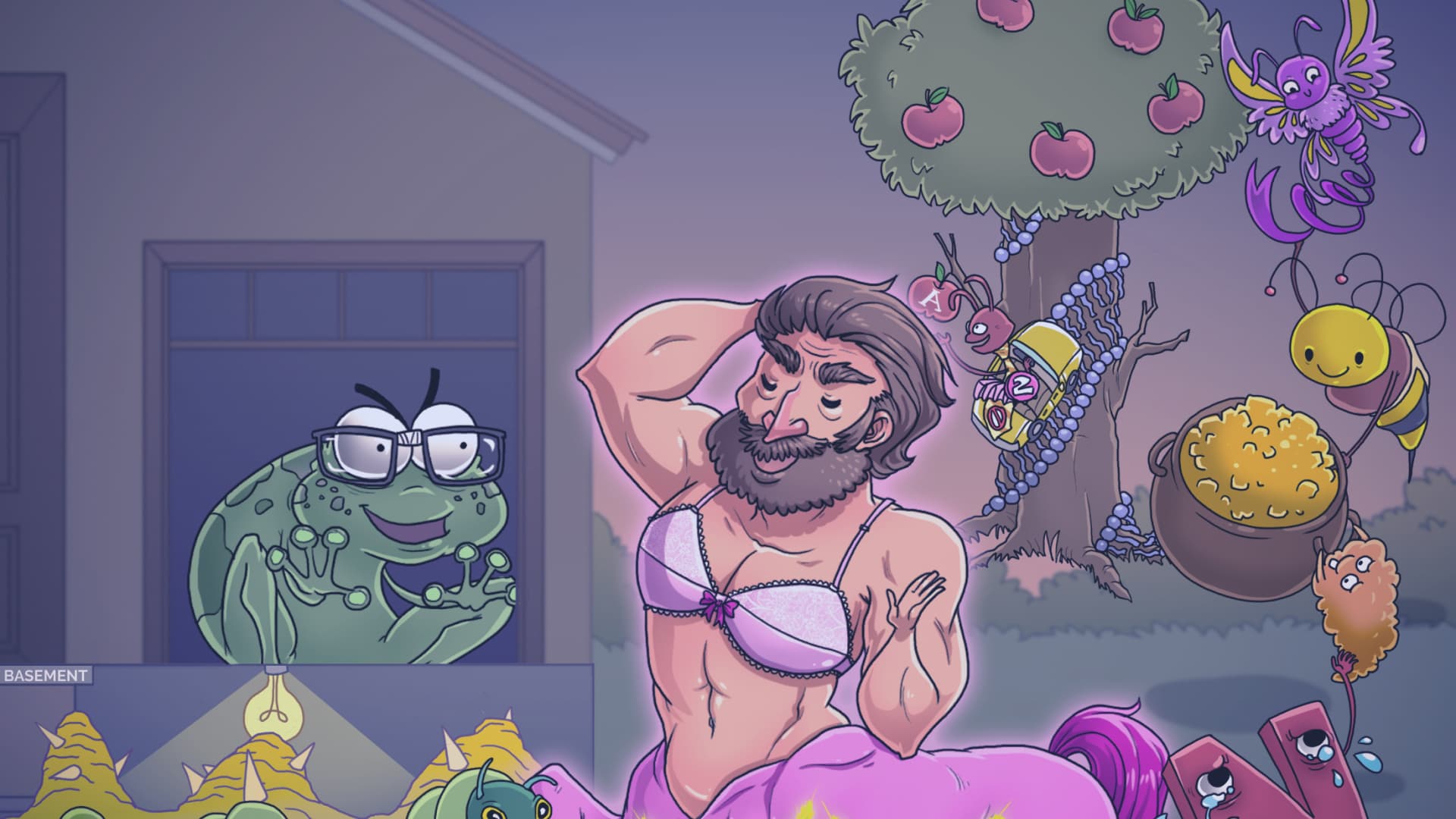 What is the secret to getting a good match for medical residency?

Meet Samuel B. Wood, an OMS-IV at the University of New England College of Osteopathic Medicine. Hear about the moment he received his match, how his choice of resources helped him get there, plus his thoughts on the comparison between the popular mnemonic resources for visual learners in medical school.Read more >

Picmonic is the only visual learning resource for STEP and COMLEX with powerful creator tools students can use to create the perfect study resource for them. Personalization isn’t something offered by other resources such as Pixorize. Add facts, characters, images and videos. Customization also helps with retention, and can become an integral part of a robust study routine.

Try it Free
What is Pixorize?

Pixorize is a visual medical school student resource. Each of the 600+ image mnemonics are designed to make hard-to-learn information easier to retain.

Is Pixorize good for USMLE Step 1?

Pixorize med school resources are good for STEP 1 studying, but only covers 600+ topics. Supplementing with another visual mnemonic-based study tool is possible (for coverage of all high-yield topics that will be covered on STEP 1), but you give up the benefit of being able to easily connect related facts across all STEP 1 topics. Also, the lack of consistent story-based characters (between pixorize and other products) may create confusion while studying, and result in lack of efficiency in remembering related facts. Selecting the right tool to study with from your first year in medical school is important to ensure you have a strong foundation for reviewing all STEP 1 topics in your second year.

Pixorize does offer free access to a few videos in each category. But most of Pixorize’s video content requires paid access with a six month or annual plan. You might also be able to find a Pixorize discount code if you search the internet.

Should I use Pixorize and Picmonic together?

When it’s time to review for an exam or for STEP 1, Picmonic will be the more efficient resource across all topics given Picmonic’s more comprehensive coverage of high-yield med school topics. If you are already a subscriber of Pixorize, you can use Picmonic to fill in the gaps for coverage of the thousands of topics Pixorize does not include.

What does Picmonic have that Pixorize does not have?

How does Pixorize MCAT compare with Picmonic Pre-Health?

Pixorize MCAT only covers 10 topics, whereas Picmonic for Pre-Health covers 100+ topics. For a full list of all MCAT related topics covered by Picmonic, click here.

How does Pixorize NCLEX compare with Picmonic for Nursing?

Pixorize NCLEX only covers 10 topics, whereas Picmonic for Nursing covers 1200+ topics. For a full list of all nursing school topics covered by Picmonic, click here.

While Pixorize does leverage memory science in its approach to helping med students retain hard to learn facts, only Picmonic has a randomized, double-blind, controlled study proving the effectiveness of Picmonic’s approach.

Over 1 million healthcare students have used Picmonic to ace exams and boards/certifications on their way to becoming successful professionals.

*Pass STEP/COMLEX, guaranteed. Start using Picmonic in your first year. If you do not pass we’ll hook you up with a full refund or double the length of your access free.